Like most mandalas this one evolved from the centre …I am really not sure where the rabbits came from but I like them! They seemed to be confident of their own reason for being there though …and I love Tom’s poetic take on this one!

Solemn rabbits guard the grassy gates
protecting something secret at the centre
where cold Truth in Beauty’s cloak awaits
for the his lover now to gently enter:
stepping silently across the fields
toward the precious prize that will not yield
to blandishments nor lies nor flattery
but only to the gentlest of breeze
that wafts across the fields beneath the sky
upon a summer’s night: a golden moon
that swings through spaces where the stars are strewn,
cuts, a crescent scimitar on high.
The gates of grass swing open, rabbits dance
as Truth and Beauty share a secret glance.

A brief break to the ongoing “What if” poetic tale, to finally bring you the last page for the Rabbit on the Moon series! 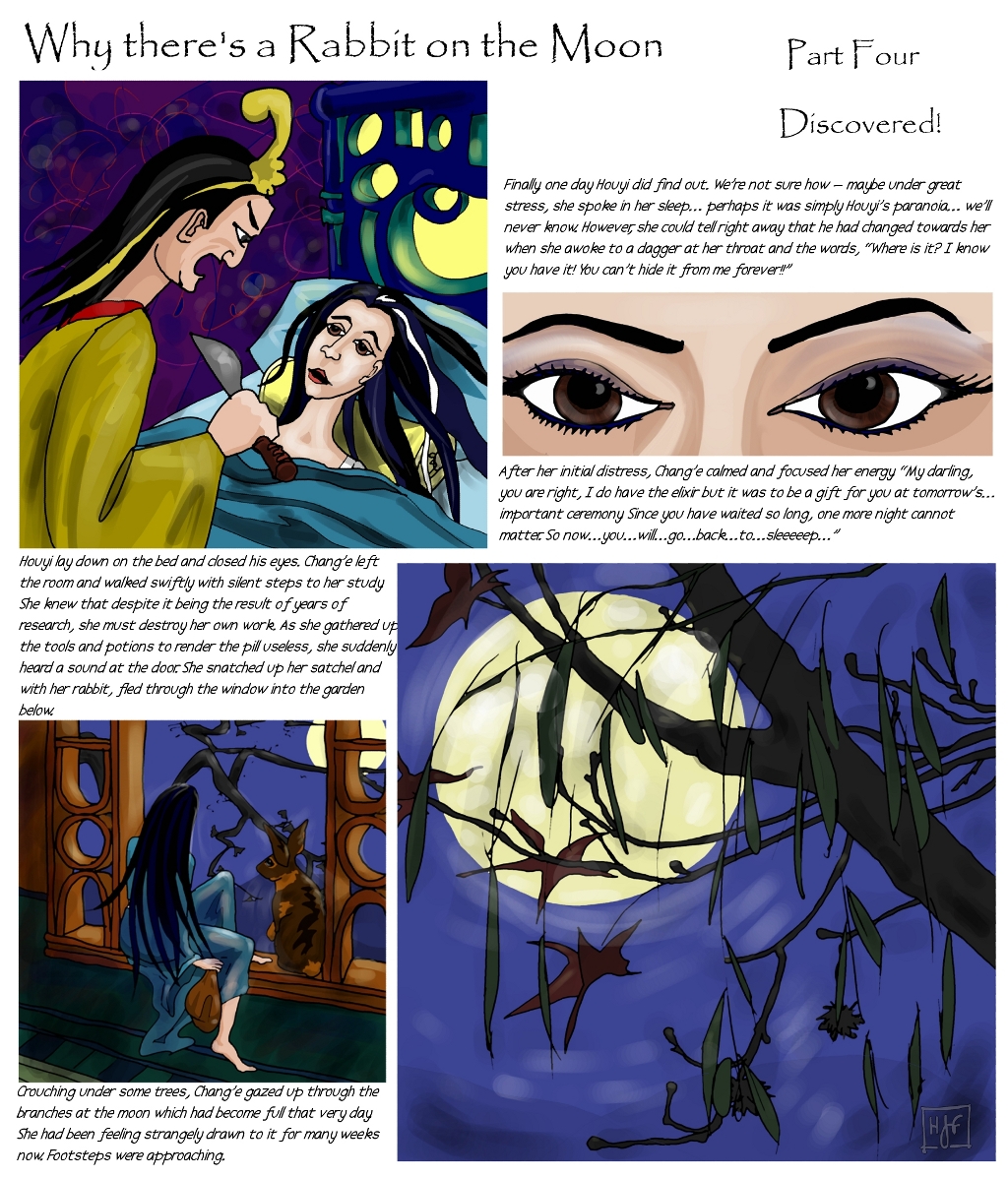 It’s been a while since we saw a page layout for Rabbit in the Moon – I guess we needed a break. Anyway, here’s the second last page – final layout next month. I’m pretty happy with this one both because it has my favourite image of the whole series and because I did the layout myself this time! Check out this month’s le 12 for the version en français!

To this day, if you look closely, you can still see them together, companionably pounding the elixir of immortality.

Epilogue:
Houyi died shortly after of rage – that’s what they called a heart attack back then – thereby proving the ancient saying that “a tyrant never choses his own death”. The people rejoiced and vowed never to have a king again… until the next time.

Here it is – the final image for “why there’s a rabbit on the moon”! I hope you had as much fun reading as I had producing the story. By-the-way, the ancient saying I quote here, was quoted in the Tao Te Ching as an already ancient saying, see verse 42.

Well, I guess the final image will be posted next week since I am not completely happy with it yet. In the meantime, here’s the most recent recap… and you can check it out as usual en français on le 12!

images and text variant (cc) 2009 Hilary Farmer and thanks to Maxime Dallaire for the formatting of the page!

No longer having any reason to hesitate, Chang’e took the pill. Her body became feather-light and they floated up together towards the full moon, transforming to the glow of pure white jade as they rose.

Chang’e was suddenly inspired. She broke off a piece of the pill of immortality to give her beloved rabbit.

The rabbit gave her a peculiar look. “Did you not know all this time, that I was already an immortal? I chose this form in order to help you also become one.” he said. 我 是 仙 人…